Friends, tonight I discovered that the Mexicans and the Arabs should get together and swap flatbreads!

In the name of neater eating they should swap, the Mexican’s take pitta breads and the Arabs get the tortilla’s. I know the Grecian and Arabic worlds have flatbreads quite similar to the tortilla but I think it equitable that they swap. 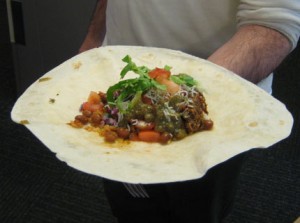 Why? The burritto is a perfect example, even if you have a black belt in origami wrapping a burritto is tricky – as most non origami trained Mexicans will attest. The tortilla really is a design failure when it comes to most latin food uses, ultra thin crust student microwave pizza being the only thing they do well – and pizza is Italian as I’m sure you all know.

No, Mexican cuisine would be far better served by the pitta bread. A pitta bread gives a similar bread to filling ratio but is just so much easier to work. Cut it in half creating pockets and they are great for all your chilli, re-fried bean and guacamole needs.

So why consign the Arab and Grecian worlds to a tortilla filled future? Well, it turns out the pitta bread is pretty rubbish at containing greasy meat fillings especially when combined with yoghurt based dressings.

You see, tonight by some mad quirk of kebab house stock control malfunction I was presented with a large mixed donner resting loosely upon a tortilla. I felt a little cheated at first, as one would, but let my adventurous side take over for once. I was rewarded with a revelation so great I had to share it with you here.

It was surely a thing of beauty, slithers of spiced mince and shards of chicken and a generous smothering of garlic sauce all perfectly contained from the first bit to the last. Every drop of superfluous oiliness funnelled perfectly back to the tray by the tortilla’s ingenious shape. No need to eat the salad first either, it was all inside! You won’t manage that with a Pitta unless you go for a really girly small kebab and even then you will end up dropping half of it in the tray. 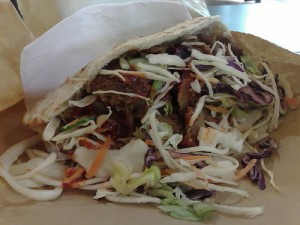 There is something about the composition of the tortilla that resists the bread disolving power of kebab fat and yoghurt based dressing too. It’s a remarkable inspired application of Latino bread, simple as that!

So there we are, when you fancy fajitas for dinner ignore the self serving propaganda plastered over the Old El Paso box – get pitta breads.

People of Great Britain, now you know your flatbreads.